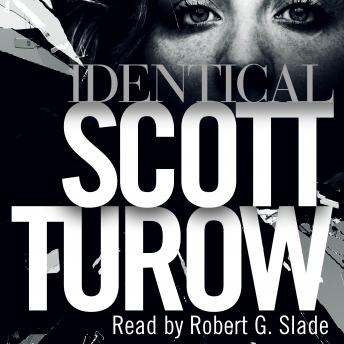 Download or Stream instantly more than 55,000 audiobooks.
Listen to "Identical" on your iOS and Android device.

A gripping masterpiece of dark family rivalries, shadowy politics and hidden secrets, Identical is the stunning new thriller from bestselling author Scott Turow.
Two families entangled in a long and complex history of love and deceit . . .
Twenty five years ago, after a society picnic held by businessman and politician Zeus Kronon, Zeus' headstrong daughter Dita was found murdered. Her boyfriend, Cass Gianis, confessed to the crime.
Now Cass has been released from prison into the care of his twin, Mayoral candidate Paul Gianis, who is in the middle of a high profile political campaign. But Dita's brother Hal is convinced there is information surrounding his sister's death that remains buried - and he won't rest until he's discovered the truth.
Hal's employee, former FBI Special Agent Evon Miller, teams up with Tim Brodie, a retired police officer, to investigate. After all this time, can they find evidence to place Paul Gianis, the 'innocent' twin, at the scene of the crime?
Soon Paul will find himself struggling to hold his campaign together amidst Hal's increasingly damning allegations. But what does the mayoral candidate really have to hide? And why has Cass Gianis vanished?