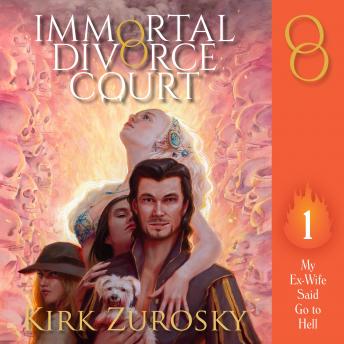 Download or Stream instantly more than 55,000 audiobooks.
Listen to "Immortal Divorce Court Volume 1: My Ex-Wife Said Go to Hell" on your iOS and Android device.

Welcome to a world where mythological creatures mess up their relationships just like we do. With a forever ex, the drama never goes away!

Immortal vampire assassin Sirius Sinister learns this the hard way after being served divorce papers by Bloodsucker Number One—a shady woman from his past—he realizes there's a major problem: he was never even married to her, or so he thought. Regardless of the truth, Sirius is put under the jurisdiction of Immortal Divorce Court.

You would think by now he’d know having sex can lead to horrific consequences like marriage, children, and ex-wives—but some habits just won’t die. Leaving his faithful vampire Maltese, Garlic, behind, Sirius travels to court to defend himself with the help of his demon attorney, Maximillian Justice. Unfortunately, the trial quickly spirals out of control, and Sirius is banished to hell for a hundred years.

When Sirius finally escapes, he ends up in the Caribbean where he meets his next paramour: the Howler. After a wild romp with his new werewolf lover under the lure of a full blood moon, he finds himself becoming the father of a litter of pups—but, the Howler and her Pack want to put the dead in deadbeat dad. Luckily, Sirius is saved by the Queen of the Merfolk, who comes with a hidden agenda even as they fall in love. Can he make it work with the Queen, or will he have to head to Immortal Divorce Court once again as yet another relationship flounders?

For all those who have nursed a broken heart—or a vengeful one—Immortal Divorce Court Volume 1 is a sexy, exciting debut and the start of a hellishly fun new series about the flawed antihero Sirius Sinister.