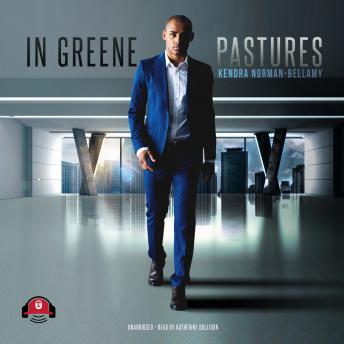 Download or Stream instantly more than 55,000 audiobooks.
Listen to "In Greene Pastures" on your iOS and Android device.

Rising from a life of poverty, Hunter Green is a staunch businessman, a workaholic with three jobs to keep his life busy and fulfilled. As the owner of the Atlanta Weekly Chronicles, he heads the most successful weekly newspaper in the state of Georgia. As a single parent, he takes pride in his son and devoted his time to being the best father he can be. And as the owner of Greene Pastures, he breeds champion horses that sell at top dollar.

When the story breaks that one of Atlanta's most prominent and respected pastors has been killed in a fiery automobile accident, Hunter stands to lose everything when the deceased pastor's distraught daughter, Jade Tides, convinces him that it wasn't an accident, but murder. Hunter uses the power of the written word, his very own newspaper, to try to solve the mystery, but the entire community threatens to take away its support if he doesn't discontinue the features. They accuse Hunter of using the pastor's untimely death as a ploy for greater financial gain and accuse him of making a mockery of God and the memory of Reverend B. T. Tides.

In the midst of it all, Hunter falls hard for Jade Tides. She's everything he desires in a woman. But is she and the so-called mystery surrounding her father's death worth losing everything for, or has the legend of Shelton Heights caught up with yet another unsuspecting family?