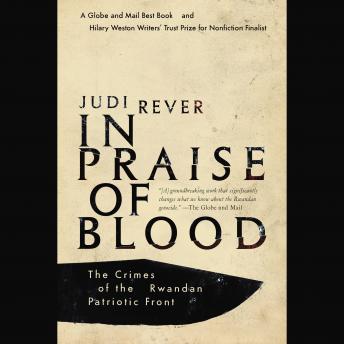 In Praise of Blood: The Crimes of the Rwandan Patriotic Front

Download or Stream instantly more than 55,000 audiobooks.
Listen to "In Praise of Blood: The Crimes of the Rwandan Patriotic Front" on your iOS and Android device.

A FINALIST FOR THE HILARY WESTON WRITERS' TRUST PRIZE: A stunning work of investigative reporting by a Canadian journalist who has risked her own life to bring us a deeply disturbing history of the Rwandan genocide that takes the true measure of Rwandan head of state Paul Kagame.

Through unparalleled interviews with RPF defectors, former soldiers and atrocity survivors, supported by documents leaked from a UN court, Judi Rever brings us the complete history of the Rwandan genocide. Considered by the international community to be the saviours who ended the Hutu slaughter of innocent Tutsis, Kagame and his rebel forces were also killing, in quiet and in the dark, as ruthlessly as the Hutu genocidaire were killing in daylight. The reason why the larger world community hasn't recognized this truth? Kagame and his top commanders effectively covered their tracks and, post-genocide, rallied world guilt and played the heroes in order to attract funds to rebuild Rwanda and to maintain and extend the Tutsi sphere of influence in the region.
Judi Rever, who has followed the story since 1997, has marshalled irrefutable evidence to show that Kagame's own troops shot down the presidential plane on April 6, 1994--the act that put the match to the genocidal flame. And she proves, without a shadow of doubt, that as Kagame and his forces slowly advanced on the capital of Kigali, they were ethnically cleansing the country of Hutu men, women and children in order that returning Tutsi settlers, displaced since the early '60s, would have homes and land. This book is heartbreaking, chilling and necessary.