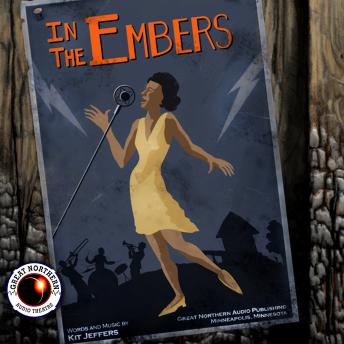 Download or Stream instantly more than 55,000 audiobooks.
Listen to "In the Embers" on your iOS and Android device.

A song, a pressed flower, and the sound of two girl's voices recovered from a burned wooden beam by using a brand new laser technique to read a charred surface like the grooves of an old 78rpm record. These are the clues that archaeologist, Digger Morgan, discovers while working on a routine dig at a Maryland Plantation. Who were the girls? When was the fire? The answers all lead to 1920s jazz pioneer, Kit Jeffers, whose voice mysteriously appears on Digger's computer and whose existence remains haunted by a singular tragic event.

With the sound design, rhythm and detail of an independent film, IN THE EMBERS stars Audie-Award winner, Robin Miles, and features an original score, inventive sound effects and a fine ensemble cast.

BONUS TRACKS: Music from the production and interviews with the cast.

IN THE EMBERS Review:

"Best known for clever live sci-fi shows, the dynamic duo of Jerry Stearns and Brian Price show that they have more up their sleeves. [In the Embers] tells the story of Digger, an archaeologist who decodes the voices of two girls from the charred ashes of an old barn, unlocking secrets, strangeness, and some saucy jazz tunes. The dialogue in this short drama is as sharp as laser etchings, and, among a strong ensemble cast, the performances of Robin Miles and Olivia DuFord stand out. Listeners will be treated to some uniquely sonic special effects, original tunes, and an imaginative story written by two of contemporary audio drama's best."-AudioFile