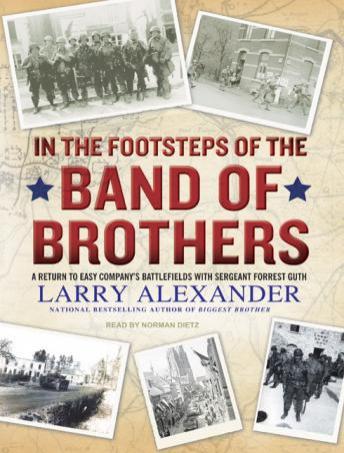 In the Footsteps of the Band of Brothers: A Return to Easy Company's Battlefields with Sergeant Forrest Guth

Download or Stream instantly more than 55,000 audiobooks.
Listen to "In the Footsteps of the Band of Brothers: A Return to Easy Company's Battlefields with Sergeant Forrest Guth" on your iOS and Android device.

On the eve of the sixty-fifth anniversary of the end of the war in Europe, Larry Alexander returns to the very battlefields that made Easy Company a legend. Accompanied by Easy veteran Sgt. Forrest Guth on his final tour, Alexander crosses an ocean and a continent to follow the path to victory taken by the famed Band of Brothers, exploring the living history of the places where they went into action and revealing what makes their story so meaningful for us to this day.

Part travelogue, part historical perspective, In the Footsteps of the Band of Brothers is an unforgettable memorial to those who shined in our country's finest hour.