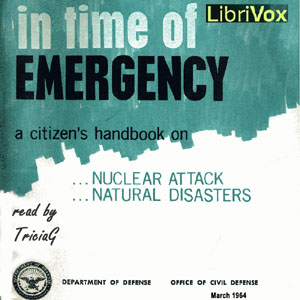 In Time Of Emergency: A Citizen's Handbook On Nuclear Attack, Natural Disasters

Download or Stream instantly more than 55,000 audiobooks.
Listen to "In Time Of Emergency: A Citizen's Handbook On Nuclear Attack, Natural Disasters" on your iOS and Android device.

Us Office Of Civil Defense

A major emergency affecting a large number of people may occur anytime and anywhere. It may be a peacetime disaster such as a flood, tornado, fire, hurricane, blizzard or earthquake. It could be an enemy nuclear attack on the United States. In any type of general disaster, lives can be saved if people are prepared for the emergency, and know what actions to take when it occurs.

This handbook, "In Time of Emergency" (1968), contains basic general information on both nuclear attack and major natural disasters. This general guidance supplements the specific instructions issued by local governments. Since special conditions may exist in some communities, the local instructions may be slightly different from this general guidance. In those cases, the local instructions should be followed. (Summary from Introduction)