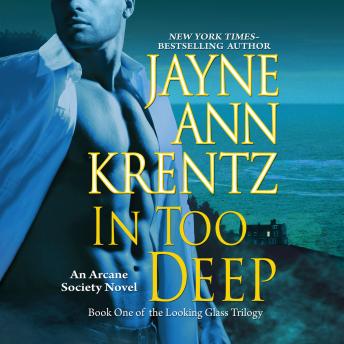 Download or Stream instantly more than 55,000 audiobooks.
Listen to "In Too Deep" on your iOS and Android device.

When Fallon Jones took over the family business, he moved Jones & Jones headquarters to Scargill Cove, a secluded coastal town in Northern California. The Cove suits him just fine, as a confirmed recluse . . . and as an investigator of the paranormal. The Cove is a hot spot, a convergence point for unusually strong currents of energy, which might explain why the town draws misfits and drifters like moths to a flame.

Isabella Valdez is used to changing apartments, jobs, even names and Social Security numbers at the drop of a hat — but this is too much. She’s been framed by some very dangerous men. They may be behind the disappearance of her grandmother. And now they’ve sent their thugs after Isabella. She would be dead if her gift of intuition hadn’t told her to run.

So she’s fled to California — and found employment with Fallon Jones. It’s been only a few days, but Fallon doesn’t remember life before his new assistant. Isabella’s already organized his pathologically chaotic office, and she doesn’t bat an eye at the psychic aspect of his job. She’s a kindred spirit, sanctuary from a world that considers his talents a form of madness. The surest sign that he’s falling for her? He doesn’t even mind her cheery personality.

But after a routine case unearths an antique clock infused with dark energy, Fallon and Isabella are dragged into the secret history of Scargill Cove. Next thing they know, they’re fighting for their lives in an abandoned underground lab — not exactly an ideal first date. Now their lives depend on the combined strength of their powers as they unravel a cutthroat conspiracy with roots in the Jones family business . . . and Isabella’s family tree.