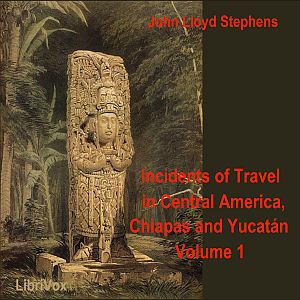 Incidents of Travel in Central America, Chiapas, and Yucatan, Vol. 1

Download or Stream instantly more than 55,000 audiobooks.
Listen to "Incidents of Travel in Central America, Chiapas, and Yucatan, Vol. 1" on your iOS and Android device.

The year is 1838. The scene is the dense Honduran forest along the Copán River. Two men, John Lloyd Stephens and Frederick Catherwood, are about to rediscover Mayan civilization. Their guide, slashing through the rampant growth with his machete, leads them to a structure with steps up the side, shaped like a pyramid. Next they see a stone column, fourteen feet high, sculptured on the front with a portrait of a man, "solemn, stern and well fitted to excite terror," covered on the sides with hieroglyphics, and with workmanship "equal to the finest monuments of the Egyptians." Stephens records these discoveries and also his travels in Central America, where he had been sent by President Van Buren as special ambassador to the ill-fated Republic of Central America. The republic being engulfed in civil war when Stephens arrives in Guatemala, he finds himself dodging revolutionary armies while he hunts for a "legitimate government" to which to present his credentials. Catherwood, meanwhile, directs his immense artistic talent to illustrating views of Mayan architecture. Incidents of Travel in Central America, Chiapas and Yucatan was a best seller in its day and has been called an "Indiana Jones" saga by modern reviewers. (Summary by Sue Anderson)