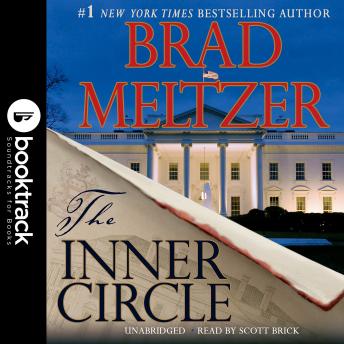 Download or Stream instantly more than 55,000 audiobooks.
Listen to "The Inner Circle: Booktrack Edition" on your iOS and Android device.

The Inner Circle: Booktrack Edition adds an immersive musical soundtrack to your audiobook listening experience! *
There are stories no one knows. Hidden stories. I love those stories. And since I work in the National Archives, I find those stories for a living.

Beecher White, a young archivist, spends his days working with the most important documents of the U.S. government. He has always been the keeper of other people's stories, never a part of the story himself...

When Clementine Kaye, Beecher's first childhood crush, shows up at the National Archives asking for his help tracking down her long-lost father, Beecher tries to impress her by showing her the secret vault where the President of the United States privately reviews classified documents. After they accidentally happen upon a priceless artifact - a 200 hundred-year-old dictionary that once belonged to George Washington, hidden underneath a desk chair, Beecher and Clementine find themselves suddenly entangled in a web of deception, conspiracy, and murder.

Soon a man is dead, and Beecher is on the run as he races to learn the truth behind this mysterious national treasure. His search will lead him to discover a coded and ingenious puzzle that conceals a disturbing secret from the founding of our nation. It is a secret, Beecher soon discovers, that some believe is worth killing for.

Gripping, fast-paced, and filled with the fascinating historical detail for which he is famous, THE INNER CIRCLE is a thrilling novel that showcases a brilliant author writing at the height of his craft.
*Booktrack editions are essentially a new genre of digital storytelling entertainment. Music and ambient audio are added to complement and enhance the audiobook experience. It is a synchronized movie-style soundtrack that complements the narration of existing audiobooks; the tempo and rhythm of the score harmonize with action, dialogue and the characters' emotional arcs.