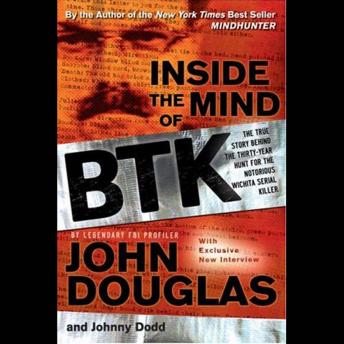 Inside the Mind of BTK: The True Story Behind the Thirty-Year Hunt for the Notorious Wichita Serial Killer

Download or Stream instantly more than 55,000 audiobooks.
Listen to "Inside the Mind of BTK: The True Story Behind the Thirty-Year Hunt for the Notorious Wichita Serial Killer" on your iOS and Android device.

This dramatic and compelling true-crime psychological thriller provides an in-depth, behind-the-scenes narrative of one of the most bizarre and terrible serial killers stories in US history. For 31 years a man who called himself BTK (Bind, Torture, Kill) terrorized the city of Wichita, Kansas, strangling and sexually assaulting a series of women (and one child), taunting the police and the community with frequent letters, communications, crime scene photographs, property stolen from his victims, bragging about his crimes in correspondence to local newspapers, tv, and radio stations, describing himself as a 'psychotic and sexual pervert' who claimed that 'I can't stop it.' After he seemed to disappear for nine years, he suddenly reappeared, complaining that no one was paying enough attention to him, that he had committed crimes for which he had not been given credit. When ultimately captured, using many techniques suggested by Douglas himself, BTK was shockingly revealed to be a 61 year old married man, cub scout leader, President of his church, with two children, who worked as a Code Compliance officer for the Wichita city government, harassing citizens about their lawns and garbage preparation, 'a glorified dog catcher...a bureaucratic bully'. John Douglas was first called into the case as an expert profiler in 1980 and has been deeply involved in the case and all its principal players ever since. After Rader was arrested he was able to obtain the only exclusive interview since sentencing, as well as exclusive interviews with family, friends, and the police. As a result, he's able to reveal news-breaking new information about why Rader did what he did, and why he stopped for a long period before surfacing again. Douglas tells the whole incredible story and also draws from it a program for new and improved police methodology to prevent such serial killers from remaining at large, including early intervention in childhood development, and more community involvement in apprehension.