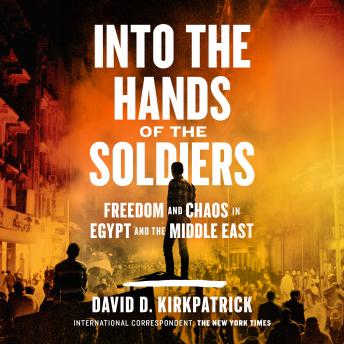 Into the Hands of the Soldiers: Freedom and Chaos in Egypt and the Middle East

Download or Stream instantly more than 55,000 audiobooks.
Listen to "Into the Hands of the Soldiers: Freedom and Chaos in Egypt and the Middle East" on your iOS and Android device.

ONE OF THE ECONOMIST'S BOOKS OF THE YEAR

David D. Kirkpatrick, a correspondent for The New York Times, was banned from Egypt for writing this book: the definitive account of the turn back toward authoritarianism in Cairo and across the Middle East.

Egypt has long set the paradigm for Arab autocracy. It is the keeper of the peace with Israel and the cornerstone of the American-backed regional order. So when Egyptians rose up to demand democracy in 2011, their thirty months of freedom convulsed the whole region.

Now a new strongman, Abdel Fattah el-Sisi, is building a dictatorship so severe some call it totalitarian. The economy sputters, an insurgency simmers, Christians suffer, and the Israeli military has been forced to intervene. But some in Washington—including President Trump—applaud Sisi as a crucial ally.

Kirkpatrick lived with his family in Cairo through the revolution, the coup and the bloodshed that followed. Then he returned to Washington to uncover the American role in the tragedy. His heartbreaking story is essential to understanding the Middle East today.