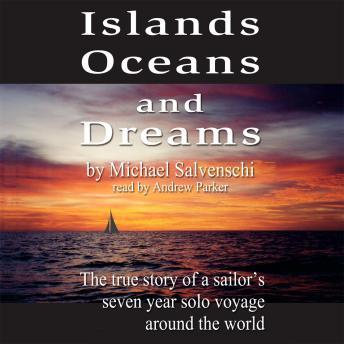 Islands, Oceans and Dreams: The True Story of a Sailor's Seven Year Solo Voyage Around the World

Download or Stream instantly more than 55,000 audiobooks.
Listen to "Islands, Oceans and Dreams: The True Story of a Sailor's Seven Year Solo Voyage Around the World" on your iOS and Android device.

Islands, Oceans and Dreams is a true story of a man who, at the age of thirty-three, began dreaming of voyaging with his wife to the South Pacific. He wasn't an adventurer or daring by nature, but he bought a boat and began learning the ways of the sea. Twenty years later, racked with the pain of divorce, and still aching to live out his dream, he set off alone for Tahiti. After reaching French Polynesia, he continued cruising for seven years and wound up solo sailing around the world. Islands, Oceans and Dreams takes the reader on that voyage. From turquoise lagoons to pirates and plenty of adventure in between, this is a must read for any sailor or arm chair traveler who loves stories of the sea.

Michael Salvaneschi has more than thirty years experience sailing California's offshore Islands. His two voyages to Mexico, his two-year stint as a commercial swordfisherman and his seven-year solo voyage around the world has taught him much about seamanship. As a guest speaker at yachts clubs, sailing societies, and service groups, Michael tells his stories shares his experiences as a solo sailor.