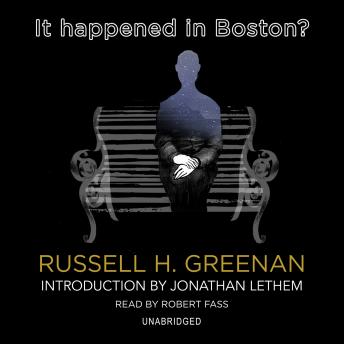 It Happened in Boston?

Download or Stream instantly more than 55,000 audiobooks.
Listen to "It Happened in Boston?" on your iOS and Android device.

Originally published in 1968 to critical acclaim,Russell H. Greenan's brilliant, audacious mystery novel It Happened in Boston? quickly became an underground sensation andhas emerged over forty years later as a genuine cult classic. In thisbreathtakingly imaginative book-now appearing in audio for the first time-weenter the mind of an unnamed artist of prodigious talent and intelligence whois determined to correct the world's wrongs via a direct confrontation with theAlmighty, no matter what the consequences. A spellbinding tale told by amemorably unreliable narrator, ItHappened in Boston? places you inside a vivid world that brilliantly andsurprisingly interweaves art, genius, love, madness, betrayal, God ... andmurder.
In 2003 IHIB?was reprinted by the Modern Library with a new introduction by celebratedwriter Jonathan Lethem and an afterword by the author, both included in thisaudio version.
Cover design by Zoë Ann Lee