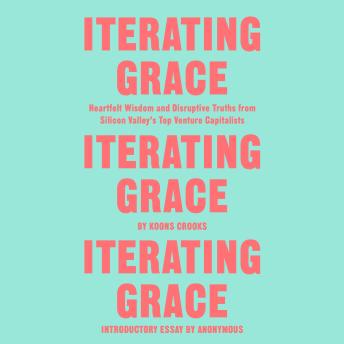 What is this tiny audiobook? Who is this Koons Crooks?
With its privately-printed, anonymously-produced 140-copy first printing, Iterating Grace became the talk of summer 2015 in the tech world. From Buzzfeed to Tumblr to Fusion, people were puzzled and enthralled by the story of Koons Crooks, a young man who took the Twittered musings of the Silicon Valley elite to heart-and ended up on a profoundly unexpected path, leaving behind only the lovingly hand-calligraphed tweets that had meant so much to him. His story struck an immediate chord.
There were competing efforts to identify the author of Iterating Grace; blog posts and lengthy comment threads pointed finger at writers all over the country, from Robin Sloan to Susan Orlean to Dave Eggers. Other early theories supposed it was the tip of an elaborate marketing scheme, and soon all would be revealed. But gradually it became clear that it was simply this: a small piece of literary art, perfectly pitched and driven by a Twain-like bemused outrage, by a creator who did not want to be identified, and would not explain anything beyond what the satirical fable said for itself.
Disruptive innovators whose tweets are illustrated in Iterating Grace include: Austen Allred, cofounder of Grasswire; Sam Altman, president of Y Combinator; Marc Andreessen, coauthor of Mosaic, cofounder of Netscape and Andreessen Horowitz; Jeff Bussgang, VC at Flybrige Capital; Tony Conrad, cofounder and CEO of about.me; Benedict Evans, VC at Andreessen Horowitz; Brad Feld, VC at Foundry Group-and many more.