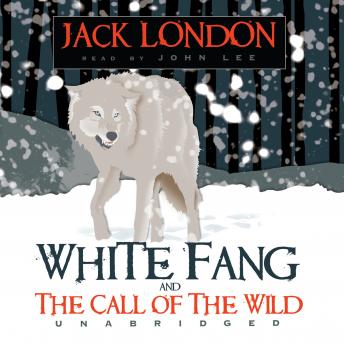 Jack London Boxed Set: White Fang and The Call of the Wild

Download or Stream instantly more than 55,000 audiobooks.
Listen to "Jack London Boxed Set: White Fang and The Call of the Wild" on your iOS and Android device.

Jack London’s adventurous nature, intuitive feeling for animal life, and superb storytelling skills give his tales a striking vitality and force. Thrilling action and a sense of justice characterize the classic stories in this collection.

In the desolate, frozen wilds of northwest Canada, a lone wolf fights the heroic daily fight for life in the wild. But after he is captured and cruelly abused by men, he becomes a force of pure rage. Only one man sees inside the killer to his intelligence and nobility. But can his kindness touch White Fang?

The Call of the Wild

A bold-spirited dog named Buck is stripped from his comfortable life on a California estate and thrust into the rugged terrain of the Klondike. There he is made a sled dog and battles to become his team’s leader, as well as the devoted servant of John Thornton, a man who shows him kindness amid the savage lawlessness of man and beast.