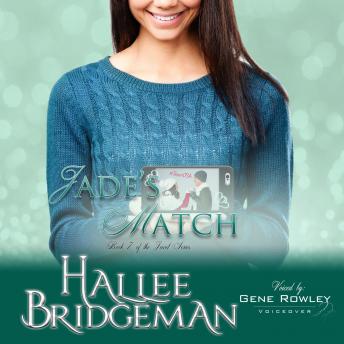 Download or Stream instantly more than 55,000 audiobooks.
Listen to "Jade's Match: The Jewel Series Book 7" on your iOS and Android device.

Two Olympians are matched in a media campaign that turns into something more than a game.

Rio Games silver medalist and social media darling CORA “JADE” ANDERSON is approached by a popular cell phone company to launch a flirty but fake media campaign with ice hockey star DAVIS ELLIOTT. When things get off to a rocky start, Cora and Davis both wonder what they’ve gotten into and how they’ll get through the months until the Korean games.

It’s not long until things start to warm up between the athletes and soon this fake romance becomes something much more real. Cora knows just how to work social media and engage her fans, and as the world watches and interacts with them, their love grows. When Davis is selected for Team USA, the opposition starts. As a Korean American, he’s already facing odds Cora can never comprehend, but he takes his frustration at the racism to the ice and lets the puck take the beating.

Things come to a head just weeks before the games begin. Can Davis and Cora’s very public relationship survive the aftermath of a very public confrontation, or are they going to have to let their love go when the Olympic flame is extinguished at the closing ceremonies?