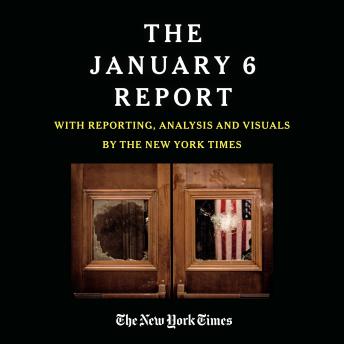 THE JANUARY 6 REPORT: Findings from the Select Committee to Investigate the Attack on the U.S. Capitol with Reporting, Analysis and Visuals by The New York Times

Download or Stream instantly more than 55,000 audiobooks.
Listen to "THE JANUARY 6 REPORT: Findings from the Select Committee to Investigate the Attack on the U.S. Capitol with Reporting, Analysis and Visuals by The New York Times" on your iOS and Android device.

FROM THE PULIZTER-PRIZE WINNING STAFF OF THE NEW YORK TIMES, this edition of THE JANUARY 6 REPORT offers the definitive record of the attack on the U.S. Capitol, with exclusive reporting, eyewitness accounts and analysis.

Listen to the report from the select committee’s investigation into the Jan. 6 attack on the Capitol, with accompanying insights from New York Times reporters who’ve covered the story from the beginning.

This edition from The New York Times and Twelve Books contains:

• THE JANUARY 6 REPORT from the Select Committee
• Reporting and analysis from The New York Times that puts the committee’s findings in context
• A timeline of key events
• Photos and illustrations, including detailed maps that show the paths insurrectionists took to breach the Capitol
• Interviews, transcripts and documents that complement the Committee’s investigation
• A list of key participants from the Jan. 6 hearings

A critical examination of the facts and circumstances surrounding that dark day, THE JANUARY 6 REPORT promises to be the definitive account of what happened, with recommendations from the committee about how to safeguard the future of American democracy.