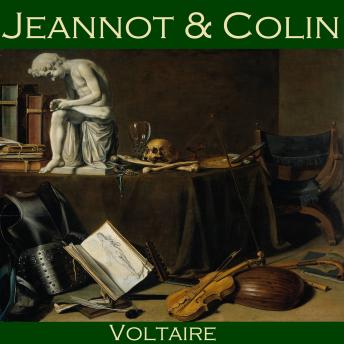 Download or Stream instantly more than 55,000 audiobooks.
Listen to "Jeannot and Colin" on your iOS and Android device.

Voltaire was the nom de plume of François-Marie Arouet (1694-1778), a well known writer, poet, satirist and wit whose ascerbic criticism of many institutions of the day once earned him a period of imprisonment in the Bastille.

In this tale of Jeannot and Colin, Voltaire not only tells an instructive tale, warning of the dangers of sudden wealth and social climbing, but also directs his satirical comments at the vacuous and fickle nouveau riche of his day, the catholic church, private education, and society in general.

Jeannot and Colin are childhood friends. Both come from working-class backgrounds in a rural part of France, but Jeannot's parents, on a trip to Paris, strike it lucky in business and within a short time become very wealthy. They purchase a title, send fine clothes to their son, and order him to Paris. Jeannot's head is turned by the sudden elevation in his status and he lords it over the humble Colin when he leaves.

In Paris, there is a lengthy discussion as to how Jeannot should best be educated for his new role as a young marquis. After rejecting Latin, geography, astronomy, history, and various other possible subjects, they settle on teaching him to dance and hold forth as a wit at dinner parties. All seems to be going well, when one day the bailiffs arrive and repossess all the family's assets. Jeannot is about to learn some very harsh life-lessons.