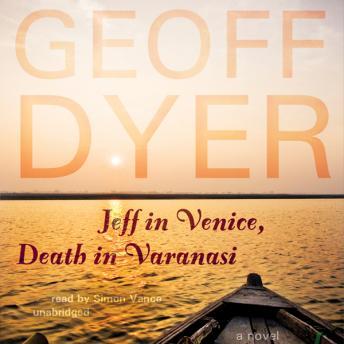 Jeff in Venice, Death in Varanasi: A Novel

Download or Stream instantly more than 55,000 audiobooks.
Listen to "Jeff in Venice, Death in Varanasi: A Novel" on your iOS and Android device.

Every two years the international art world descends on Venice for the opening of the Biennale. Among them is Jeff Atman, a jaded and dissolute journalist, whose dedication to the cause of bellini-fuelled party-going is only intermittently disturbed by the obligation to file a story. When he meets the spellbinding Laura, he is rejuvenated, ecstatic. Their romance blossoms quickly, but is it destined to disappear just as rapidly?
Every day thousands of pilgrims head to the banks of the Ganges at Varanasi, the holiest Hindu city in India. Among their number is a narrator who may or may not be the Atman previously seen in Venice. Intending to visit only for a few days, he ends up staying for months, and suddenly finds a hitherto unexamined idea of himself, the self. In a romance he can only observe, he sees a reflection of the kind of pleasures that, willingly or not, he has renounced. In the process, two ancient and watery cities become versions of each other. Could two stories, in two different cities, actually be one and the same story?
An irrepressible and wildly original novel of erotic fulfillment and spiritual yearning, Jeff in Venice, Death in Varanasi is dead-on in its evocation of place, longing, and the possibility of neurotic enlightenment.