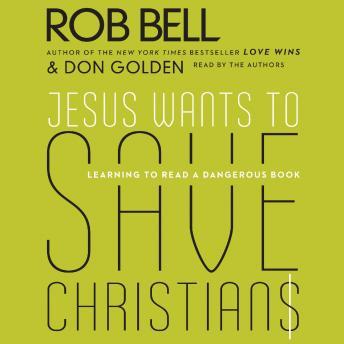 Jesus Wants to Save Christians: A Manifesto for the Church in Exile

Download or Stream instantly more than 55,000 audiobooks.
Listen to "Jesus Wants to Save Christians: A Manifesto for the Church in Exile" on your iOS and Android device.

“Bell and Golden trace redemption from Genesis to Revelation...[delivering] a tough message the American church needs to hear.”
—Christianity Today

“Equal parts prophetic warning and call to action, Jesus Wants to Save Christians exhorts Jesus’s followers to sacrifice their comforts and hear the ‘cry of the oppressed.’”
—Grand Rapids Press

In Jesus Wants to Save Christians, Rob Bell, the New York Times bestselling author of Love Wins joins with Don Golden, Christian activist and vice president of World Relief, to call upon the church to break from its cultural captivity and challenge the assumptions of the American Empire. Bell, whom the New York Times calls “one of the country’s most influential evangelical pastors” and whom Time Magazine named one of the most influential people in 2011, is a pioneer in the movement seeking new Christian expression, and anyone who has ever questioned their faith or is those looking for answers they cannot find in their own church’s standard teachings will discover a new creed in Bell and Golden’s provocative and spiritually enlightening work.