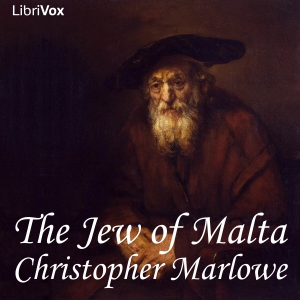 The Jew of Malta

Download or Stream instantly more than 55,000 audiobooks.
Listen to "The Jew of Malta" on your iOS and Android device.

Christopher “Kit” Marlowe (baptised 26 February 1564 – 30 May 1593) was an English dramatist, poet, and translator of the Elizabethan era. The foremost Elizabethan tragedian before William Shakespeare, he is known for his magnificent blank verse, his overreaching protagonists, and his own untimely death.

The Jew of Malta (1589) is an original story of religious conflict, intrigue, and revenge, set against a backdrop of the struggle for supremacy between Spain and the Ottoman Empire in the Mediterranean. The Jew of Malta is considered to have been a major influence on William Shakespeare’s The Merchant of Venice.

The play contains a prologue in which the character Machiavel, a Senecan ghost based on Niccolò Machiavelli, introduces “the tragedy of a Jew.” (summary by Wikipedia)

Thomas Heywood: The well-known dramatist of the time has included Prologues and Epilogues both for the court and the Cock-Pit theatre “…making choice of you unto whom to devote it;” . (summary by David Lawrence)