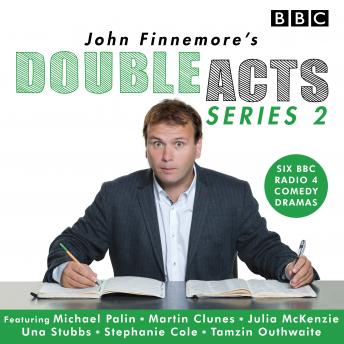 This is the second series of one-off comedies written by the genius behind the smash-hit radio sitcom “Cabin Pressure” – John Finnemore. The first series won the coveted Writers Guild of Great Britain award for Best Comedy.

Each show is a comedy perfumed by just two actors - including (across the series) famous household names such as Martin Clunes (“Doc Martin”), Julia McKenzie (“Fresh Fields”) and the inimitable voice of Carolyn in “Cabin Pressure”, Stephanie Cole.

Stephanie Cole and Kerry Godliman (“Derek”) star in the first episode – “The Queen’s Speech” - Victoria is very much hoping to see a conjuror, or at the very least a parrot - but instead meets Mabel...

In Episode 2, Julia McKenzie (“Fresh Fields”) and Gus Brown star in “Mercy Dash” - Malcolm needs some help. Sue has a spot of time on her hands. Winchester beckons...

In the third show, newcomers Kieran Hodgson (2017 South Bank Arts - Breakthrough Comedy Award) and Ethan Lawrence (“Bad Education”) are Pidge & Gavin in “Here’s What We Do” - Pidge & Gavin! The old team back together again for one last mission...

And Show 4 pairs the inimitable Una Stubbs (“Sherlock”) and Tamzin Outhwaite (“Redcap”) in “The Rebel Alliance” - Eileen and Lizzie are both determined to enjoy the wedding. No matter what Yvonne does...

Show 5 stars Martin Clunes (Doc Martin) and Tom Goodman-Hill (“Humans”) with a bit of “Penguin Diplomacy”- when a chance meeting between Søndergaard and Bunning could very well lead to a new Cold War...

And John Finnemore himself stars in the final show alongside comedy hero Michael Palin in “The Wroxton Box” - Alec is late as usual. But Percy is wearing different socks. Something big is brewing...