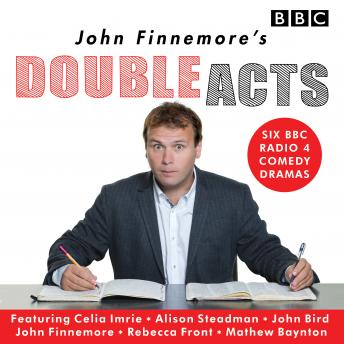 Celia Imrie, Alison Steadman, John Bird and Rebecca Front are among the cast of these BBC Radio 4 comedy dramas from the writer and producers of Cabin Pressure.

These six self-contained duologues, each one brimming with humour and charm, come from the pen of John Finnemore, author and star of the award-winning John Finnemore's Souvenir Programme.

A Flock of Tigers 1934. Edmund and Dolorosa are sharing a train carriage – and embarking on an unexpected adventure. Starring Charles Edwards and Celia Imrie.

The Goliath Window It is 1820, and Mark and Luke have arranged an appointment in the vestry of St Anne's Church, Mayton Chennett. Starring Simon Kane and John Finnemore.

English for Pony-Lovers In a German guest house, Elke is waiting to receive an English lesson from Lorna. Starring Rebecca Front and Beth Mullen.

Hot Desk A receptionist and a security guard meet every day at 7am and 7pm to hand over a desk. Starring Matthew Baynton and Jenny Bede.