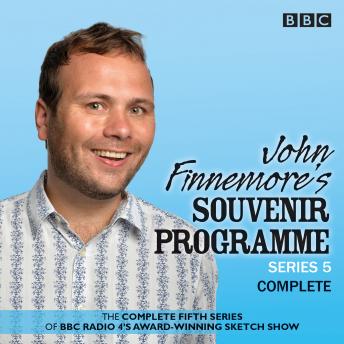 John Finnemore's Double Acts Series 1 is the winner of the Writers Guild Award for Best Radio Comedy and the Comedy.co.uk awards for Best Radio Sketch Show!

The complete fifth series of BBC Radio 4’s award-winning sketch show, written by and starring the writer of Cabin Pressure.

John Finnemore's Souvenir Programme has won a host of awards, including the 2015 BBC Audio Drama Award for 'Best Scripted Comedy with Live Audience'. Written by and starring John Finnemore, this fifth series of the hit show returns with more witty wordplay and laugh-out-loud sketches.

These six episodes include an unlikely wager, a troubled bluesman, a rip-roaring adventure on the high seas, a new approach to the News; and, well, since you asked him for a tale of espionage…

In addition, the voices in John's head push him to the tipping point, we look back at a career in accounting, hear of an over-rated experience and, we're sorry to say, Patsy Straightwoman returns with an interview sketch.