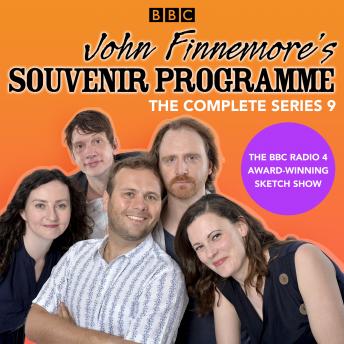 'One of our best sketch writers' Observer

John Finnemore returns with his multi-award-winning sketch show, but this series is very different to the previous eight. There are still sketches and songs, and it's still written and performed by him and his usual fantastic ensemble cast - but with no live studio audience, John has taken the opportunity to try something new.

Each episode in this series of Souvenir Programme consists of scenes from one person's life, played in reverse order. There's no narrative as such - it's still a sketch show - but as we follow the characters back in time, from lockdown Zoom calls to childhood birthdays and funerals, the individual sketches link up to form an overall picture, portraying the sprawling history of an entire multi-generational family.

And, as if that wasn't enough, there are also some terrific tall tales, a paean of praise, and a truly unforgettable earworm...

Clever, complex, hilarious and poignant, these Souvenir Programmes with a twist star Lawry Lewin as Russ, Margaret Cabourn-Smith as Deborah, Simon Kane as Jerry, Carrie Quinlan as Vanessa and John Finnemore as Newt.