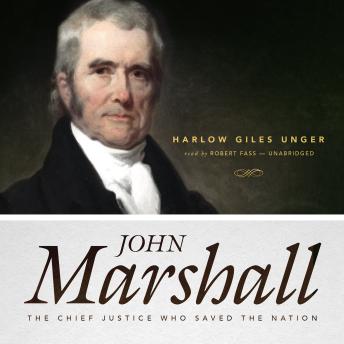 John Marshall: The Chief Justice Who Saved the Nation

Download or Stream instantly more than 55,000 audiobooks.
Listen to "John Marshall: The Chief Justice Who Saved the Nation" on your iOS and Android device.

A soul-stirring biography of John Marshall, the young Republic's great chief justice who led the Supreme Court to power and broughtlaw and order to the nation
In the political turmoil that convulsed America after GeorgeWashington's death, the surviving Founding Fathers went mad-literally pummelingeach other in Congress and challenging one another to deadly duels in theirquest for power. Out of the political intrigue, one man emerged to restore calmand dignity to the government: John Marshall. The longest-serving chief justicein American history, Marshall transformed the Supreme Court from an irrelevantappeals court into the powerful and controversial branch of government thatAmericans today either revere or despise.
Drawing on rare documents, Harlow Giles Unger shows how,with nine key decisions, Marshall rewrote the Constitution, reshapedgovernment, and prevented Thomas Jefferson from turning tyrant. John Adamscalled his appointment of Marshall to chief justice his greatest gift to thenation and "the pride of my life."