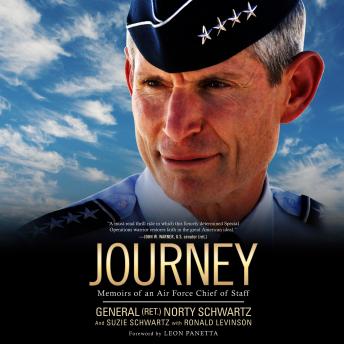 Download or Stream instantly more than 55,000 audiobooks.
Listen to "Journey" on your iOS and Android device.

Forty years ago, Norty Schwartz's dysfunctional home life preceded his application to the Air Force Academy, where he was provided with a new family and sense of worth he had never gotten from his own home. This purpose has driven the general throughout his remarkable career, taking him to Alaska, the Pentagon, Germany, and Florida during Hurricane Opal; and it has also allowed him to work alongside Presidents Bush and Obama and Secretaries of Defense Donald Rumsfeld, Robert Gates, and Leon Panetta.

Journey is a book about leadership. It is packed with the general's lessons from life in the military: breaking the mold, flying in uncharted airspace, battles-from Iraq to the Pentagon, Afghanistan to Congress. It's about pushing limits in an era of diminishing budgets and fewer resources to fuel the furnace of innovation. Schwartz chronicles the phenomenal story of the evolution of the U.S. special operations, such as what was achieved when taking down Bin Laden. The general discusses the controversial new technologies that have been allowing America to build new capabilities in cyber warfare. Many believe General Schwartz's greatest legacy will be the dramatic escalation of the drone program. He is a staunch advocate for it, and this book will explain why.