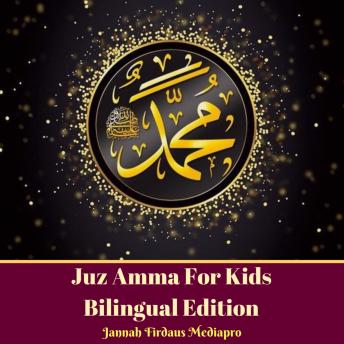 Download or Stream instantly more than 55,000 audiobooks.
Listen to "Juz Amma For Kids Bilingual Edition" on your iOS and Android device.

The Holy Quran literally meaning 'the recitation'; also romanized Qur'an or Koran is the central religious text of Islam, which Muslims believe to be a revelation from Allah SWT (God). It is widely regarded as the finest work in classical Arabic literature. The Quran is divided into chapters (surah), which are then divided into verses (ayah).
Muslims believe that The Holy Quran was verbally revealed by Allah SWT (God) to the final Prophet Muhammad SAW through the archangel Gabriel (Jibril) gradually over a period of approximately 23 years, beginning on 22 December 609 CE, when Prophet Muhammad SAW was 40, and concluding in 632, the year of his death. Muslims regard The Holy Quran as the most important miracle of Prophet Muhammad SAW, a proof of his prophethood, and the culmination of a series of divine messages that started with the messages revealed to Prophet Adam (Pbuh) and ended with Prophet Muhammad SAW.
A juz? (literally meaning 'part') is one of thirty parts of varying lengths into which the Quran is divided. Division into juz has no relevance to the meaning of the Quran and anyone can start reading from anywhere in the Quran. During medieval times, when it was too costly for most Muslims to purchase a manuscript, copies of the Quran were kept in mosques and made accessible to people; these copies frequently took the form of a series of thirty parts (juz').
Some use these divisions to facilitate recitation of the Quran in a month-such as during Ramadan, when the entire Quran is recited in the Tarawih prayers, usually one juz a night. The most commonly memorized juz is juz? amma, which is the 30th juz and contains chapters (sura) 78 through 114, most of the shortest chapters of the Quran. Juz? amma is named after the 1st word of the 30th chapter (chapter 78).