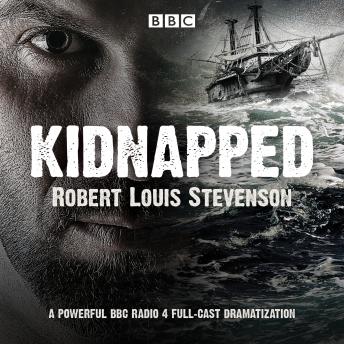 Download or Stream instantly more than 55,000 audiobooks.
Listen to "Kidnapped: BBC Radio 4 full-cast dramatisation" on your iOS and Android device.

It is 1751, and seventeen-year-old David Balfour is all alone in the world. Recently orphaned, he receives a letter instructing him to seek out his sole remaining relative at the House of Shaws. But on meeting his uncle Ebenezer, David soon realises that he is a shifty, miserly man with designs on his inheritance.

After an attempt on David's life fails, Ebenezer tricks him into boarding the brig Covenant, where he is knocked unconscious, kidnapped and taken to sea. His fate seems sealed – he is to be transported to a plantation in the Carolinas and sold into slavery.

But David's adventures are only just beginning – for when he meets charismatic Jacobite Alan Breck, he soon finds himself shipwrecked, wanted for murder and fleeing for his life across the Scottish Highlands...