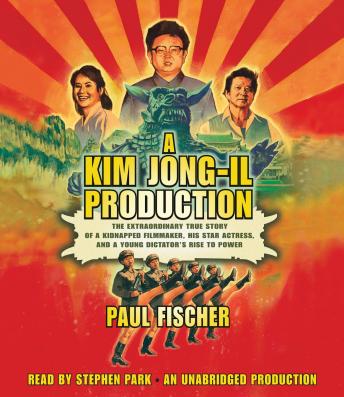 A Kim Jong-Il Production: The Extraordinary True Story of a Kidnapped Filmmaker, His Star Actress, and a Young Dictator's Rise to Power

Download or Stream instantly more than 55,000 audiobooks.
Listen to "A Kim Jong-Il Production: The Extraordinary True Story of a Kidnapped Filmmaker, His Star Actress, and a Young Dictator's Rise to Power" on your iOS and Android device.

Before becoming the world’s most notorious dictator, Kim Jong-Il ran North Korea’s Ministry for Propaganda and its film studios. Conceiving every movie made, he acted as producer and screenwriter. Despite this control, he was underwhelmed by the available talent and took drastic steps, ordering the kidnapping of Choi Eun-Hee (Madam Choi)—South Korea’s most famous actress—and her ex-husband Shin Sang-Ok, the country’s most famous filmmaker.

Madam Choi vanished first. When Shin went to Hong Kong to investigate, he was attacked and woke up wrapped in plastic sheeting aboard a ship bound for North Korea. Madam Choi lived in isolated luxury, allowed only to attend the Dear Leader’s dinner parties. Shin, meanwhile, tried to escape, was sent to prison camp, and 're-educated.' After four years he cracked, pledging loyalty. Reunited with Choi at the first party he attends, it is announced that the couple will remarry and act as the Dear Leader’s film advisors. Together they made seven films, in the process gaining Kim Jong-Il’s trust. While pretending to research a film in Vienna, they flee to the U.S. embassy and are swept to safety.

A nonfiction thriller packed with tension, passion, and politics, A Kim Jong-Il Production offers a rare glimpse into a secretive world, illuminating a fascinating chapter of North Korea’s history that helps explain how it became the hermetically sealed, intensely stage-managed country it remains today.