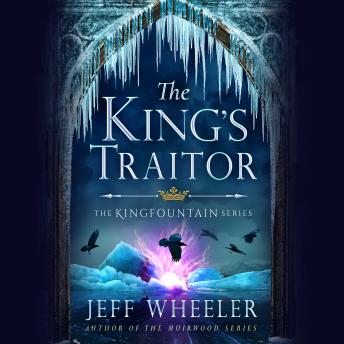 Download or Stream instantly more than 55,000 audiobooks.
Listen to "The King's Traitor" on your iOS and Android device.

A Wall Street Journal bestseller.
The third book in the million-copy bestselling Kingfountain series from Jeff Wheeler.
Against all odds, Owen Kiskaddon grew from frightened boy to confident youth to trusted officer in the court of Kingfountain—and watched its regent, Severn Argentine, grow ever more ruthless and power-mad. Robbed of his beloved protector, his noble mentor, and his true love, Owen has anticipated the day when the king he fears and reviles, yet loyally serves, will be toppled. Now, as Severn plots a campaign of conquest, the time has come to take action…and Owen’s destiny demands that he lead the strike.
Ordered to incite war with a neighboring kingdom, Owen discovers its beautiful, reclusive ruler, whose powerful magic might even exceed his own. Together they mount a daring plot to overthrow the corrupt monarch, crown the rightful heir, and defeat the prophesied curse threatening Kingfountain with wintry death. But Severn’s evil is as bottomless as the fabled Deep Fathoms. To keep his ill-gotten throne, he’ll gladly spill the blood of enemies and innocents alike.