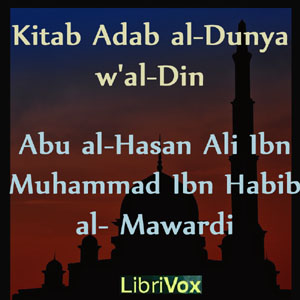 Download or Stream instantly more than 55,000 audiobooks.
Listen to "Kitab Adab al-Dunya w'al-Din (The Ethics of Religion and of this World)" on your iOS and Android device.

Al-Mawardi (Alboacen) was one of the famous Islamic authors and jurists. He was a well-known man in the "Abbassid" empire-a mature thinker who left a legacy of many excellent books which represent Islamic culture. He lived at a time when the "Abbasid" empire was in highly advanced state, scientifically and culturally. The book is divided into five chapters; the first chapter: 'Virtue of the Intellect and Censure of Immoral Desires' is a philosophical look includes Islamic and non-Islamic opinions. It could be considered an introduction to Chapter 4 "Ethics of Life" which is an economic and social context more or less close to Ibn- Khuldoon in his introduction. The second chapter: "Ethics of Knowledge" is devoted to pure Islamic subjects which reflect the views of Muslims thoughout the generations, since lifetime of the Messenger, peace be upon him, up until the author's days. The third chapter, "Ethics of Religion", and the fifth, "Ethics of the Spirit", are a mixture of religious, Islamic points of view and logical concepts that add the fourth dimension to life, which is the metaphysical dimension, that supports the material, social and political aspects of life. (Summary by Youssef Safiljil; Edited by Nicholas19)