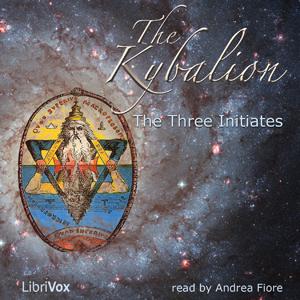 Download or Stream instantly more than 55,000 audiobooks.
Listen to "The Kybalion (Version 2)" on your iOS and Android device.

The Kybalion: Hermetic Philosophy is a 1908 book claiming to be the essence of the teachings of Hermes Trismegistus, published anonymously by a group or person under the pseudonym of "the Three Initiates". The Kybalion was first published in 1908 by the Yogi Publication Society and is now in the public domain, and can be found on the internet. The book purports to be based upon ancient Hermeticism, though many of its ideas are relatively modern concepts arising from the New Thought movement. The book early on makes the claim that it makes its appearance in one's life when the time is appropriate and includes variations of material found in the book of Proverbs. The book devotes a chapter to each of its seven "Principles", or axioms: The Principle of Mentalism, The Principle of Correspondence, The Principle of Vibration, The Principle of Polarity, The Principle of Rhythm, The Principle of Cause and Effect, and The Principle of Gender. Summary by Wikipedia