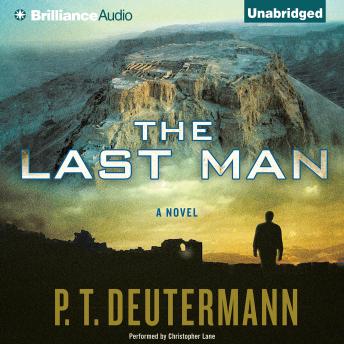 Download or Stream instantly more than 55,000 audiobooks.
Listen to "The Last Man" on your iOS and Android device.

In a desert wasteland, framed by the shimmering fastness of the Judean Hills, lie the ruins of the fortress called Masada. Overlooking the Dead Sea and the salt mines that were once Sodom and Gomorrah, the stone palaces of Herod brood a thousand feet above the desolate countryside, where the Jewish revolt against Rome of 70 AD ended in the self-immolation of 960 people. According to legend, the defenders of Masada, rather than be taken prisoner by the Roman Tenth Legion, killed themselves, their wives, and their children the night before the Romans took the fortress. David Hall, an American nuclear engineer, arrives in Israel on a mission of truth. Believing that the defenders killed themselves to protect a great secret, Hall plans to explore the heavily guarded site and, he hopes, discover the real reasons behind the dramatic end of the Roman siege. Hall is shadowed by an Israeli archaeologist, Judith Ressner, an attractive but reserved professor with an agenda of her own. There is more than history hidden within the mountain, and Hall soon finds himself the target of ferocious Israeli security forces bent on defeating his quest, who will stop at nothing to protect Masada from intruders. Combining dynamic history with a highly charged contemporary story of adventure and espionage, The Last Man is a thought-provoking thriller of the Middle East, past and present.