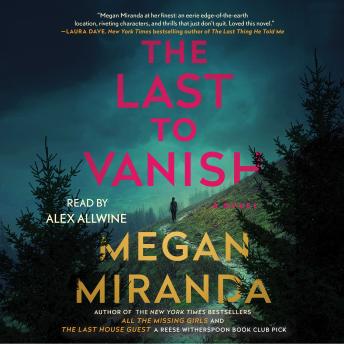 The Last to Vanish

Download or Stream instantly more than 55,000 audiobooks.
Listen to "The Last to Vanish" on your iOS and Android device.

“This eerie thriller…can stand next to Shirley Jackson’s The Haunting of Hill House and Stephen King’s The Shining.” —Booklist (starred review)

New York Times bestselling author Megan Miranda returns with a gripping and propulsive thriller that opens with the disappearance of a journalist who is investigating a string of vanishings in the resort town of Cutter’s Pass—will its dark secrets finally be revealed?

Ten years ago, Abigail Lovett fell into a job she loves, managing The Passage Inn, a cozy, upscale resort nestled in the North Carolina mountain town of Cutter’s Pass. Cutter’s Pass is best known for its outdoor offerings—rafting and hiking, with access to the Appalachian trail by way of a gorgeous waterfall—and its mysterious history. As the book begins, the string of unsolved disappearances that has haunted the town is once again thrust into the spotlight when journalist Landon West, who was staying at the inn to investigate the story of the vanishing trail, then disappears himself.

Abby has sometimes felt like an outsider within the community, but she’s come to view Cutter’s Pass as her home. When Landon’s brother Trey shows up looking for answers, Abby can’t help but feel the town closing ranks. And she’s still on the outside. When she finds incriminating evidence that may bring them closer to the truth, Abby soon discovers how little she knows about her coworkers, neighbors, and even those closest to her.

Megan Miranda brings her best writing to The Last to Vanish, a riveting thriller filled with taut suspense and shocking twists that will keep you guessing until the very end.