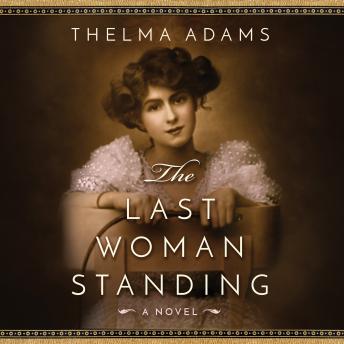 The Last Woman Standing: A Novel

Download or Stream instantly more than 55,000 audiobooks.
Listen to "The Last Woman Standing: A Novel" on your iOS and Android device.

At once an epic account of an improbable romance and a retelling of an iconic American tale, The Last Woman Standing recalls the famed gunfight at the O.K. Corral through the eyes of a spunky heroine who sought her happy ending in a lawless outpost—with a fierce will and an unflagging spirit.

Two decades after the Civil War, Josephine Marcus, the teenage daughter of Jewish immigrants, is lured west with the promise of marriage to Johnny Behan, one of Arizona’s famous lawmen. She leaves her San Francisco home to join Behan in Tombstone, Arizona, a magnet for miners (and outlaws) attracted by the silver boom. Though united by the glint of metal, Tombstone is plagued by divided loyalties: between Confederates and Unionists, Lincoln Republicans and Democrats.

But when the silver-tongued Behan proves unreliable, it is legendary frontiersman Wyatt Earp who emerges as Josephine’s match. As the couple’s romance sparks, Behan’s jealousy ignites a rivalry destined for the history books…