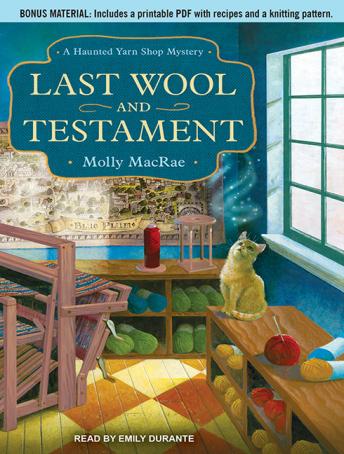 Download or Stream instantly more than 55,000 audiobooks.
Listen to "Last Wool and Testament: A Haunted Yarn Shop Mystery" on your iOS and Android device.

Thank Goodness It's Fiber: That's the name of the spunky group of fiber and needlework artists founded by Ivy McClellan, Kath's beloved grandmother. Though Ivy has recently passed on, the members still meet regularly at her fiber and fabric shop, The Weaver's Cat, which Kath has now inherited. But that's only the first in a series of surprises when Kath returns to the small town of Blue Plum, Tennessee, to settle her grandmother's affairs.There's been a murder, and it turns out her grandmother was the prime suspect. Before she can begin to clear Ivy's name, Kath encounters a looming presence in the form of a gloomy ghost. It turns out the specter has just as much interest in solving the murder as Kath. So, with a little help from the members of TGIF-and a stubborn spirit from beyond-she sets out to unravel the clues and hook the real killer . . .