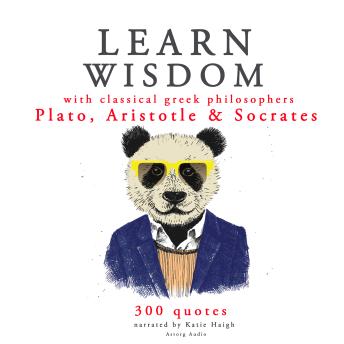 Learn wisdom with 300 quotes by the three most famous classical greek philosophers : Plato, Socrates and Aristotle. Pupil of the great Plato, teacher of Alexander the Great, Aristotle is a massively influential figure in Western philosophy. Cicero described his literary style as "a river of gold". Modern ethics are based on his ideas about virtue; his writings literally encompassed all the scientific knowledge of the time and beyond, so much that many of his findings were still considered cutting-edge many century afterwards. Aristotle also shaped modern logic, and put his mark on all subsequent philosophy and theology. We have selected for you 100 of his most profound and influent quotes, so that you can see for yourself how modern these fundamental ideas still are. Nourish your daily life with Aristotle's Ethics, strengthen your thoughts with his Logic, and adopt his scientific ways for a clearer life. Alfred North Whitehead once noted: "the safest general characterization of the European philosophical tradition is that it consists of a series of footnotes to Plato." Plato is indeed considered the most pivotal figure in the development of philosophy, along with his teacher, Socrates, and his student, Aristotle. But his writings are often light, fresh and funny; it was Plato who invented the dialogue in philosophy, which make a point very easy to follow and the occasion of various scenic arrangements. Plato is one of the most dazzling writers ever known; we have selected for you one hundred of his best quotes, for you to find inspiration and get acquainted with this fondamental part of our culture. Socrates is an enigmatic figure, known chiefly through the accounts of others like Plato and Aristophanes. He was one of the most brilliant intellects ever, and devised what would later be called the Socratic method, which is a way of leading one's interlocutor to see his errors and contradictions through clever questioning before leading him to the truth. In ancient Athens, Socrates was widely known as a "gadfly", that is, an annoying insect buzzing at people's ears, because he kept questioning prejudices and contradictions; he was eventually tried and executed for "corrupting the minds of the youth". We have selected for you 100 of his best quotes, so you can decide whether this can be considered corruption, or an incredibly efficient way of learning to think for oneself.