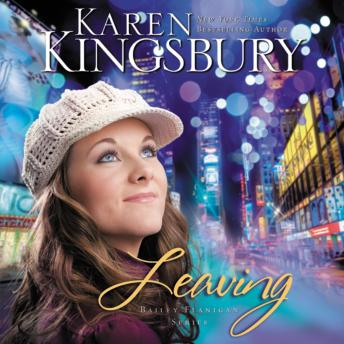 Download or Stream instantly more than 55,000 audiobooks.
Listen to "Leaving" on your iOS and Android device.

The Bailey Flanigan series begins with Bailey leaving Bloomington for the adventure of a lifetime. She has won an audition for the ensemble of a Broadway musical in New York City. She's determined to take advantage of this once-in-a-lifetime opportunity, but is she really ready to leave family and friends for the loneliness of the city? And what of Cody? His disappearance has her worried about their future and praying that their love can survive.In order to be closer to his mother in jail, Cody takes a coaching job in a small community outside Indianapolis. New friends, distance, and circumstances expose cracks in his relationship with Bailey Flanigan.Love, loneliness, big opportunities, and even bigger decisions highlight the first book in the new Bailey Flanigan series that features members of the popular Baxter family and finally completes the Bailey Flanigan/Cody Coleman story.