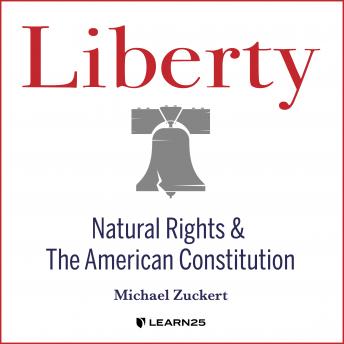 Download or Stream instantly more than 55,000 audiobooks.
Listen to "Liberty: Natural Rights and the American Constitution" on your iOS and Android device.

Much of the political life of the United States takes the form of contests about rights. This passion for liberty was forged and stoked by the nation's foundational documents: the Declaration of Independence and the Bill of Rights of the U.S. Constitution.

Now you can join esteemed political scientist Professor Michael Zuckert for a fascinating exploration of America's enduring passion for rights as sparked by these two documents. The Nancy R. Dreux Professor Emeritus of Political Science at Notre Dame, Prof. Zuckert was awarded a Lifetime Achievement Award from the Jack Miller Center for his many contributions to American political scholarship.
In 15 gripping audio lectures, Prof. Zuckert examines the doctrine of rights as it finds first expression in these early documents, exploring American thinking about rights from the founding up to recent battles over controversial rights such as the right to same-sex marriage. He reveals not only the transformational effect of these documents on U.S. national identity, but also their ripple effect in constitutions throughout the world.

By following the thread of rights language throughout American political documents alongside Prof. Zuckert, you'll gain a deeper understanding of the American emphasis on rights protections. You'll also heighten your awareness of the nation's failure to protect the rights of certain of its citizens throughout history and the ways in which this has-and hasn't-been rectified by further rights legislation.

This course is part of the Learn25 Collection.