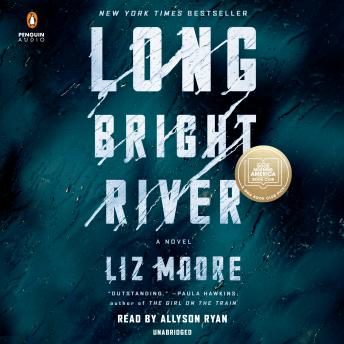 Download or Stream instantly more than 55,000 audiobooks.
Listen to "Long Bright River: A Novel" on your iOS and Android device.

NAMED A BEST BOOK OF THE YEAR BY NPR, PARADE, REAL SIMPLE, and BUZZFEED

'[Moore’s] careful balance of the hard-bitten with the heartfelt is what elevates Long Bright River from entertaining page-turner to a book that makes you want to call someone you love.” – The New York Times Book Review

'This is police procedural and a thriller par excellence, one in which the city of Philadelphia itself is a character (think Boston and Mystic River). But it’s also a literary tale narrated by a strong woman with a richly drawn personal life – powerful and genre-defying.” – People

'A thoughtful, powerful novel by a writer who displays enormous compassion for her characters. Long Bright River is an outstanding crime novel… I absolutely loved it.'
—Paula Hawkins, #1 New York Times-bestselling author of The Girl on the Train

Two sisters travel the same streets, though their lives couldn't be more different. Then one of them goes missing.

In a Philadelphia neighborhood rocked by the opioid crisis, two once-inseparable sisters find themselves at odds. One, Kacey, lives on the streets in the vise of addiction. The other, Mickey, walks those same blocks on her police beat. They don't speak anymore, but Mickey never stops worrying about her sibling.

Then Kacey disappears, suddenly, at the same time that a mysterious string of murders begins in Mickey's district, and Mickey becomes dangerously obsessed with finding the culprit--and her sister--before it's too late.

Alternating its present-day mystery with the story of the sisters' childhood and adolescence, Long Bright River is at once heart-pounding and heart-wrenching: a gripping suspense novel that is also a moving story of sisters, addiction, and the formidable ties that persist between place, family, and fate.