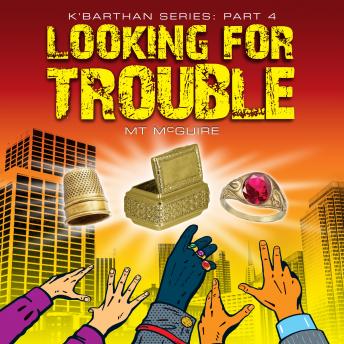 Download or Stream instantly more than 55,000 audiobooks.
Listen to "Looking For Trouble" on your iOS and Android device.

The Pan of Hamgee doesn’t believe in miracles but if he’s going to save K’Barth it looks as if he might need one.

He's not quite as alone as he thought. The punters from The Parrot and Screwdriver are right behind him and he has rescued three of his friends from the Grongolian Security Forces, who are now of course, three of the nation's most wanted, which doesn't make life easy. He even has something of a plan for once. It involves making peace with the Resistance, trying to resurrect the Underground movement, and toppling Lord Vernon.

Now, The Pan just needs to keep his head down and maintain a low profile. He must be brave and clever and stay in control. That's going to be a first. But the hardest part will be staying alive long enough to put his plan into action.

Q - So, tell us about the K’Barthan Series. What made you write it? What makes it special?

A - You know that saying, that if the book you want doesn't exist you have to write it? That. I love funny British authors, comedic, epic, fantasy, sci-fi, adventure, action, British humour - or humor. Misfit characters, the weirder the better, a love-to-hate baddie, a genre mash up like StarWars. I like weird alien races, flying cars, car chases, static powered lasers. Dr Who meets Terry Pratchet. K'Barth is kind of first contact, only not. You'll find all sorts of quirky characters, from six feet Swamp Things with antennae to cute furry Blurpons, with fluffy ears, big button eyes and a penchant for extreme violence. But for all that, the eternal questions they face are the same as ours. This series is best read in order:

There's also a 30min prequel, Unlucky Dip, which is free, for details go to: https://www.hamgee.co.uk/audioud.html