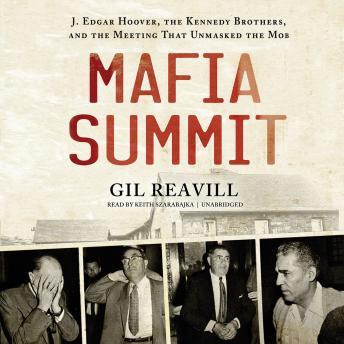 Mafia Summit: J. Edgar Hoover, the Kennedy Brothers, and the Meeting That Unmasked the Mob

Download or Stream instantly more than 55,000 audiobooks.
Listen to "Mafia Summit: J. Edgar Hoover, the Kennedy Brothers, and the Meeting That Unmasked the Mob" on your iOS and Android device.

Here is the true story of how a small-town lawman in upstate New York busted a Cosa Nostra conference in 1957, exposing the Mafia to America.
In a small village in upstate New York, mob bosses from all over the country-including Vito Genovese, Carlo Gambino, Joe Bonanno, Joe Profaci, Cuba boss Santo Trafficante, Jr., and future Gambino boss Paul Castellano-were nabbed by Sergeant Edgar D. Croswell as they gathered to sort out a bloody war of succession.
For years FBI director J. Edgar Hoover had adamantly denied the existence of the Mafia, but young Robert Kennedy immediately recognized the shattering importance of the Apalachin summit. Appointed attorney general after his brother John became president, Bobby embarked on a campaign to break the spine of the mob, engaging in a furious turf battle with the powerful Hoover.
Detailing mob killings, the early days of the heroin trade, and the crusade to loosen the hold of organized crime, this momentous story will caputre fans of Gus Russo and Luc Sante. Reavill scintillatingly recounts the beginning of the end for the Mafia in America and how it all began with a good man in the right place at the right time.