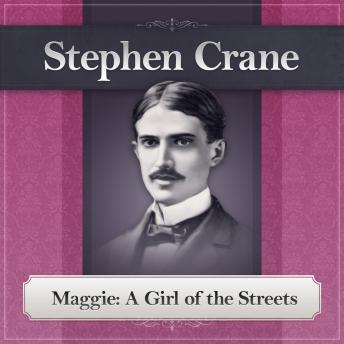 Maggie: A Girl of the Streets, A Stephen Crane Novel

Download or Stream instantly more than 55,000 audiobooks.
Listen to "Maggie: A Girl of the Streets, A Stephen Crane Novel" on your iOS and Android device.

Maggie: A Girl of the Streets

Maggie: A Girl of the Streets is a ground breaking novel relating to the precarious state of women in the new industrial world at the end of the nineteenth century. One blemish on a reputation and a woman would often be banned from her house, subject to earning her living on the streets, and often dying young as Maggie does. The irony is that Maggie has two abusive parents, the father who dies early in the novel, and the mother who hurls her out, with much fussing and lamenting about "all she has done" for Maggie.

Crane's irony builds from the beginning through Maggie's brother, who is upset his friend debauched Maggie and got her pregnant. The turning point is in Jimmy who starts to realize that he has done the same to other brothers' sisters. It is the early realization of this behavior that makes the most interesting psychological impact on the novel.

As always, Maggie contains the beautiful word paintings of Crane. As Maggie descends towards her doom each successive bar/entertainment place Maggie is taken to becomes increasingly bawdy and unappealing. Maggie preserves what order there is in the family home, nurses her mother, but that does not protect her position in the end, when she gets hurled out.

This is one of the most moving stories in American literature. If this novel doesn't break your heart a little, no novel will. In our mind, Maggie is the equal of Crane's more famous work, The Red Badge of Courage, which depicts war with a candor similar to the depiction of the tenements and people of the Bowery in New York. A must read for all students of American literature and a wonderful one for the rest of us.