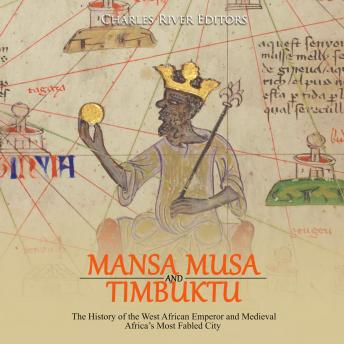 Mansa Musa and and Timbuktu: The History of the West African Emperor and Medieval Africa's Most Fabled City

Download or Stream instantly more than 55,000 audiobooks.
Listen to "Mansa Musa and and Timbuktu: The History of the West African Emperor and Medieval Africa's Most Fabled City" on your iOS and Android device.

Recent research has revealed that the richest person of all time lived in the 14th century in West Africa and went by many names, including Kankan Musa Keita, Emir of Melle, Lord of the Mines of Wangara, Conqueror of Ghanata and the Lion of Mali II, but today he is usually referred to as Mansa Musa. Adjusting his wealth to modern values, he was worth about an estimated $400 billion as the Sultan of ancient Mali, which controlled the trade routes across the Sahara Desert.
About 6,000 years ago, the ancient Sahara was a tropical jungle with lush grasslands and substantial rivers until it moved north of the Equator as a result of tectonic plate movements. The seismic activity changed the location of land and the composition of the atmosphere. The African Humid Period seems to have ended relatively quickly, taking a couple of thousand years before being replaced by a much drier climate, and this started a process of desertification that forced many animals and human inhabitants to the outer edges of the immense desert. There would have been passages through the area that vanished as the harsh climate inexorably clawed at the mountains and hills, turning them into the sand that obliterated all traces of their ever having been there. By about 600 BCE, the terrain and habitat had become much less hospitable, so much so that it was no longer possible to use horses and oxen to carry commodities. As a result, trading became difficult and sporadic and slowly disappeared.
This all changed when camels were introduced to the Sahara, initially via Roman invaders and then with the Berber traders from Arabia moving across North Africa in search of gold and salt. As they reached the southern Sahel, they encountered the old established trading system and routes of the Garamantes, the people who handled the trade in and out of the Sahara from West Africa. The combination of the use of camels with the already re-established West African trade routes brought about rapid economic progress that resulted in the area supplying more than half the world's gold for more than 1,000 years, beginning around 400 CE.
Of course, this timing coincided with the rise of global trade routes such as the Silk Road and the beginning of Europe's Age of Discovery. By the 12th century, it was believed that far to the east, beyond the lands controlled by the Muslim armies, lived a powerful Christian king named Prester John in the land of India. While he was a king, he was also a priest ("Prester" means Priest and was supposedly the only title he took). His kingdom was believed to be grand and contained many wonders. Marco Polo looked for Prester John, and the Crusaders wanted to reach out to Prester John. Portugal's Henry the Navigator sent his ships out with explicit instructions of what they should do if they met Prester John, and on his historic voyages, Columbus carried two books, The Travels of Marco Polo and The Travels of Sir John Mandeville, both of which have long passages on Prester John.
The belief in the existence of fabled African kingdoms and kings ensured that real African kings were also shrouded in lore, and few would become as legendary as Mansa Musa. Mansa Mansa Musa and Timbuktu: The History of the West African Emperor and Medieval Africa's Most Fabled City looks at one of the most famous rulers of the Middle Ages and the development of the city. Along with pictures and a bibliography, you will learn about Mansa Musa and Timbuktu like never before.