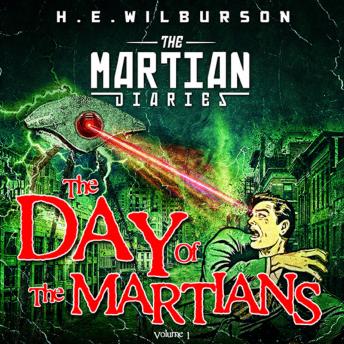 Martian Diaries, The: Vol. 1 The Day Of The Martians: A sequel to The War Of The Worlds

Download or Stream instantly more than 55,000 audiobooks.
Listen to "Martian Diaries, The: Vol. 1 The Day Of The Martians: A sequel to The War Of The Worlds" on your iOS and Android device.

A New War Of The Worlds Begins as Martian Tripods Return To Earth!

The terror of the coming of the Martians is all but a distant memory, a bad dream that has faded with time....All George wants is a quiet suburban life – but at breakfast one morning his newspaper reports the shocking discovery of a Martian cylinder, found intact and unopened, and carefully transported to London. Could it be from the first alien invasion and after more than seven years are there Martians still alive inside?

By teatime George learns that vengeance seeking Martians and their tripod fighting machines are already on their way back. This time they are armed with a doomsday weapon, able to destroy all bacteria and completely annihilate Earth. The countless numbers of their projectiles form a huge green comet and invasion day will be just before Christmas.

The first attack by aliens was enough for any lifetime, but who would expect to be involved with two? Can George and his wife escape this new Martian apocalypse and how will our planet survive a second time?

The Day Of The Martians continues the iconic Mars novel by H.G. Wells, in this exciting, unmissable action adventure with original music and immersive sound effects. Start this award-winning 3 part continuation of The War Of The Worlds today!


WHAT PEOPLE HAVE SAID

'....sometimes in life, amongst all the boring stuff, something comes along to shake up your life and make you grateful for other people's creations.' Breakaway Reviews