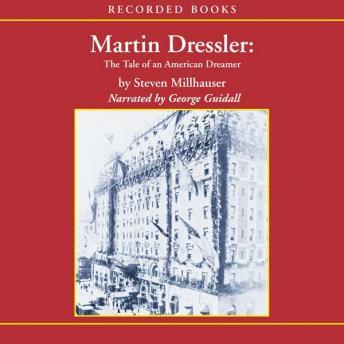 Martin Dressler: The Tale of an American Dreamer

Download or Stream instantly more than 55,000 audiobooks.
Listen to "Martin Dressler: The Tale of an American Dreamer" on your iOS and Android device.

The American Dream is a theme so compelling it resonates throughout our culture. In Martin Dressler, Steven Millhauser creates a young man who, in dedicating his life to it, becomes a symbol of that dream. Powerful, lyrical, finely crafted, this best-selling book won the Pulitzer Prize, was a National Book Award finalist, and was a New York Times Notable Book of the Year. Martin Dressler, son of an immigrant cigar maker, believes he can achieve anything if he works hard enough. At the turn of the century, he rises from the shadows of his father's shop in New York City to become a powerful entrepreneur and builder of hotels. But, as he contemplates this land of almost limitless opportunity, his plans grow impossibly grand. Through the curve of Martin's spectacular rise and eventual downfall in the business world, his tale remains a uniquely American one. Martin may not always control an empire, but he will always be able to dream. Narrator George Guidall voices Martin's industry and optimism while his performance captures the literary power of Millhauser's style.