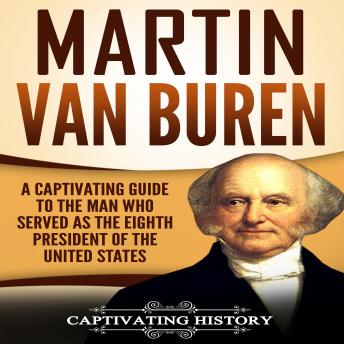 Martin Van Buren: A Captivating Guide to the Man Who Served as the Eighth President of the United States

Download or Stream instantly more than 55,000 audiobooks.
Listen to "Martin Van Buren: A Captivating Guide to the Man Who Served as the Eighth President of the United States" on your iOS and Android device.

Explore the captivating life of Martin Van Buren
History chiefly remembers Martin Van Buren as the eighth president of the United States (1837- 1841). He was also, however, notable for achieving many firsts in American politics. He was the first American president to be born a citizen of the country, and not a British subject. He was the first Dutchman and the first man without Anglo-Saxon ancestry to serve as president. He was the first and only American president to have been raised in a language other than English. He was also the first New Yorker to ascend to the Oval Office in the White House, at a time when Manhattan was becoming the urban heart of a future America (as it is today). Historians have also recognized him as the first 'professional politician' to occupy the presidential seat. His expressed capacity for political intrigue, strategic pragmatism, and politically expedient 'non-committalism' has earned him his fair share of critics and detractors.
The darkness of his times (the first depression, the question of slavery, the forceful relocation of Native American tribes from their ancestral lands) easily come to mind, but America was also hurtling towards the future we live in during Van Buren's reign. The seeds of the modernity we recognize so well - railway networks, democracy, the printing press - were sowed in his era.
Six small townships and cities - in Maine, Kentucky, Indiana, Missouri, Ohio, and Arkansas - still bear his surname. To understand the history of American politics, one must understand Van Buren's often overlooked legacy. This audiobook will give you an in-depth understanding of this man, born a tavern owner's son, who became one of the founders of the Democratic Party. Get this audiobook now to learn more about Martin Van Buren!