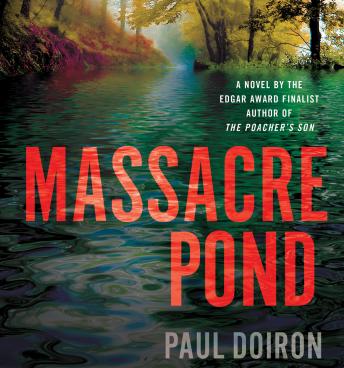 Download or Stream instantly more than 55,000 audiobooks.
Listen to "Massacre Pond: A Novel" on your iOS and Android device.

Massacre Pond is Edgar finalist Paul Doiron's superb new novel featuring Game Warden Mike Bowditch and a beautiful, enigmatic woman whose mission to save the Maine wilderness may have incited a murder

On an unseasonably hot October morning, Bowditch is called to the scene of a bizarre crime: the corpses of seven moose have been found senselessly butchered on the estate of Elizabeth Morse, a wealthy animal rights activist who is buying up huge parcels of timberland to create a new national park.

What at first seems like mindless slaughter—retribution by locals for the job losses Morse's plan is already causing in the region—becomes far more sinister when a shocking murder is discovered and Mike's investigation becomes a hunt to find a ruthless killer. In order to solve the controversial case, Bowditch risks losing everything he holds dear: his best friends, his career as a law enforcement officer, and the love of his life.

The beauty and magnificence of the Maine woods is the setting for a story of suspense and violence when one powerful woman's missionary zeal comes face to face with ruthless cruelty.